Our Journey So Far

It all began with Peanut.

She is a golden-cheeked gibbon stolen from Vietnam and sold to a British bird smuggler. Peanut was rescued by Monkey World Ape Rescue Centre in 2000.

A year later, another golden-cheeked gibbon, Pung-Yo, joined her.  Smuggled from Vietnam, he had been rescued by the Pingtung rescue centre in Taiwan, before being transferred to Monkey World (pictured above).

Little then was known about the species, native only to southern Vietnam and east Cambodia, but their rescues prompted Monkey World (spearheaded by its founder the late Jim Cronin and his wife Dr Alison Cronin) and Pingtung (led by Professor Kurtis Pei) to launch investigations into the illegal trade.

And the charity EAST was born. 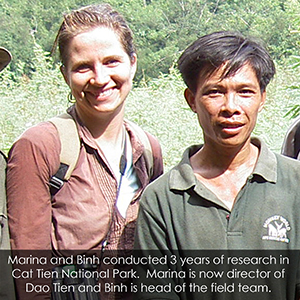 To support Vietnam’s government in protecting their primates, work began to create a centre to look after confiscated animals and offer facilities rehabilitate them, where possible, for release into the wild.

It specialises in four endangered species found in the region. These are black-shanked doucs, silvered langurs, golden-cheeked gibbons and pygmy lorises. 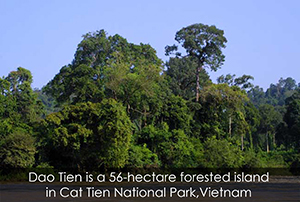 These are just a few highlights of what has been achieved so far:

Since 2009 Dao Tien has released and monitored the progress of many primates. These are just a few examples: