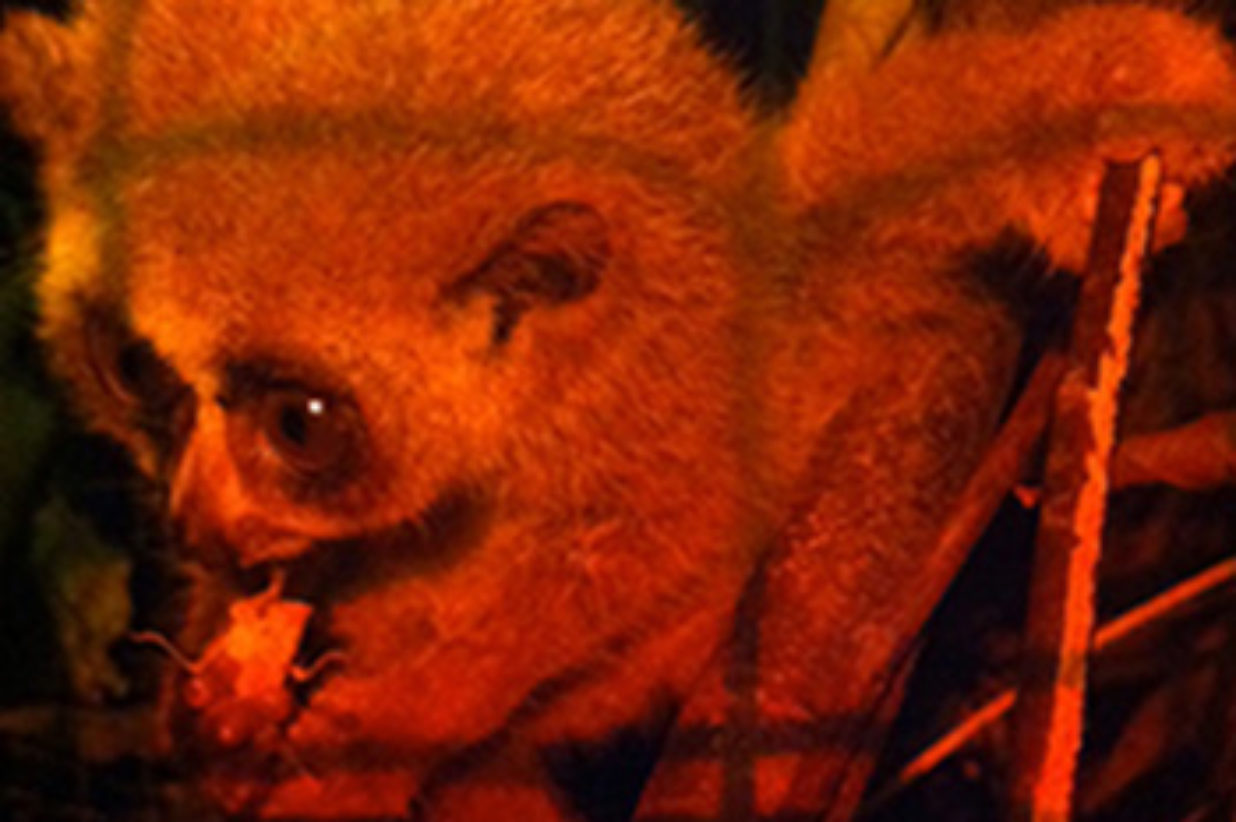 Since December 2014 we have had a constant flow of pygmy loris confiscated from the illegal trade.

They have been confiscated from tourist attractions in Dalat City, from being kept as pets locally and in Ho Chi Minh City and from being taken to market in the buffer zone of Cat  Tien.

Some arrived in very poor condition after years of being kept in small cages. Two had tiny babies and one baby (Taite) had lost her mother- eaten by the hunters. Infants cannot be released to the forest on their own – our data show that individuals need to be mature at over two years to survive.  So we had the dilemma of how best to keep Taite, maintaining her wild behaviours so she would still be fit for release.

Just with the day to day care Taite was craving attention and started to run to the keepers for insects. Although signs of a healthy young loris, these are also signs of an individual that will not retain behavioural fitness for release. First we introduced insect feeding devices made out of bamboo to help keep her busy while we worked out a plan.  Then we moved Taite next to a single wild female we had recently rescued, Olive.

Olive has one eye and a cauliflower ear but is otherwise just perfect. She behaves and moves like a wild pygmy loris. Could she be a surrogate mum for Taite and teach her how to be a loris? We know gibbons make excellent surrogate mums but had no experience with pygmy loris. From day Olive and Taite slept together, touching at the mesh.

After one month we introduced them.  The slide was opened in the evening and Taite instantly ran into Olive’s cage. Olive was asleep up high in a rattan tunnel. Taite busied herself eating insects and fruit, quietly making her way towards Olive.  Eventually she got brave and sat behind Olive, gently touching her.  After five minutes there was still no movement from Olive, so Taite ran round to the tunnel entrance and approach her from the front. Taite scuttled along the tunnel and must have woken Olive from a deep sleep for she immediately ran out of the tunnel. Taite pretended to busy herself with insects once more.  Another five minutes passed before Taite boldly approached Olive again, sitting next to her. Soon after, Olive started to move her head and then, after a rush of movement, both were vigorously licking each other – quite roughly but happily. From that moment on Taite has had a step mum, who watches out for her and curls up with her for sleeps.

Although, Olive is ready to go back to the wild, we will hold her back for 12 months to help Taite, so, hopefully, both loris have an excellent chance of survival when released back to the forest.  Once our new loris area is complete these two will be transferred to a quiet treed enclosure until ready for release.